The History of Pecan Pie 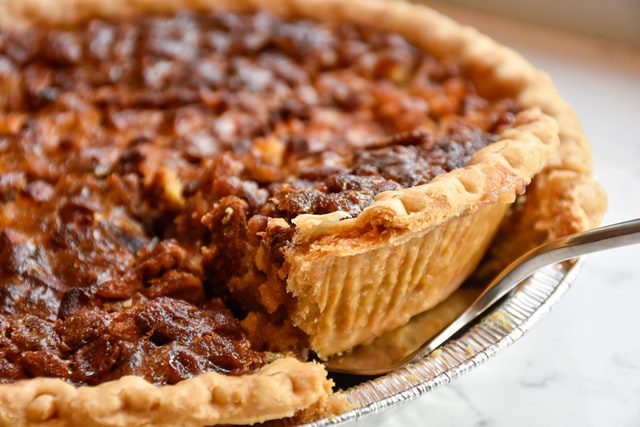 Pecan pie is a favorite throughout the South, but it’s also beloved by people across the country and throughout the world. Gourmet chefs now consider this delicious dessert to be a delicacy that should not be missed.

Let’s break down its history and how it became a southern staple:

Who Invented The Pecan Pie?

The exact origins of pecan pie are much like the origins of molasses pie, which means that you could say there is no real origin and everyone has their own version. The one thing that everyone agrees on is that it’s delicious.

While there’s no recipe or mention of it prior to 1886, that’s not to say it wasn’t being made and eaten before then. Pecan pie has been around for many years and it was likely an old family recipe that simply hadn’t made it into print yet.

Pecan pie is an American invention. Its history can be traced back thousands of years, to Native Americans who used the nut’s meat as a filling for their medicine pouches and in recipes like wampum belts. The colonists began using pecans as a food source, though they didn’t begin to bake with them until the mid-1800s. Today, pecan pie remains popular throughout America during Thanksgiving and Christmas dinners, though it is consumed all year long by those who appreciate a sweet snack or rich dessert full of rich flavor and crunchy texture.

What’s In The Pie?

Pecan pie is a classic American dessert that has been enjoyed for generations. While it may have humble roots in the Southern U.S., pecan pie has become one of the most popular desserts in this country. While the ingredients and preparation methods do vary, most pecan pies are prepared with a cookie-type crust, ground nuts or pecan pieces, eggs and sugar, butter and vanilla extract.

The secret to a tender pecan pie is using a good quality vanilla extract. Sugar, eggs and butter are the traditional ingredients that bring most custards and puddings (including this one) to life. Corn syrup brings out the flavor of each pecan and adds lightness to the final result. Pastry takes practice but there are many tricks for making it easier than it looks. A traditional Southern favorite, pecan pie is perfect for any holiday gathering.

How Did It Become A Signature Southern Dessert?

This simple, syrup-based pecan pie is a classic holiday treat and a perfect dish to bring to a potluck. The Southern pecan pie has been a staple part of the Thanksgiving table since the 1930s when recipes for a syrup-based pecan pie appeared on the labels of Karo syrup bottles. Because of this, the pecan pie became a popular treat to make in southern states like Mississippi, Alabama, and Georgia.

Want to make your own pie? Shop Our Pecan Trees For Sale To Make Your Own Traditional Pecan Pie!